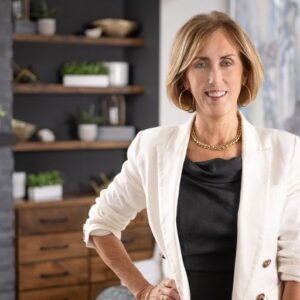 Design comes naturally for Leawood interior designer Karen Mills who wore clothes as a child she designed with the help of her grandmother.  Today with a global reputation as a forerunner in interior design, Karen is renowned for transforming a client’s living experience into one that engages the senses, nurtures the soul, and provides a healing environment for work or play.

Known best for her celebrity design and lifestyle show Living Large – listed on Wikipedia alongside Martha Stewart Living as one of the most popular U.S. life-style shows, Mills has been featured in the news over 170 times including USA Today, ABC, NBC, CBS, and two international design books who list her as one of the top designers in the world.

Karen Mills pens an award-winning blog read by subscribers in over 130 countries and has been a media spokesperson for national brands including Sherwin Williams, Kohler, GE, and Ferguson.  Mills is also an internationally published writer and the recipient of numerous awards including the prestigious national 2021 Enterprising Women of the Year and the 2022 KNOW Women 40 over 40 national awards.

As former host of the renowned Living Large design show (2005-2013), Mills sought out and featured celebrity guests and experts including movie stars and network TV actors that was broadcast on Entercom Radio station network.

Articles written by Karen Mills have been featured by Forbes magazine (5946 views), Home Entertainment Today magazine (a Robb Report publication), and Houzz magazine among others.

Karen Mills award-winning interior design blog has subscribers in over 130 countries and is featured by Sherwin Williams and numerous media outlets around the world including local Kansas City magazines.

Other community service has included 2010 design chair for the Symphony Designers’ Show house that won a national award, leading the IBM Mentoring Program for at risk teens, marketing director for Team Impact anti-drug, anti-alcohol program, Boy Scouts of America committee member, fundraising for United Way, serving as a board member for City of Olathe Green Council which included long term planning, ambassador for the Kauffman Performing Arts Center, board member for New Friends, and leading a team to help people release emotional baggage.

Designed a piano for Steinway and asked to design a bathroom for Kohler headquarters corporate showroom.

Graduated from the University of Kansas where she studied Interior Design and Television.

For more inspiration click on the link to our award-winning interior design blog.

Then make sure you read our Houzz articles here.

This site uses Akismet to reduce spam. Learn how your comment data is processed.